Comments
InfoQ is a portal with lot of interesting and happening stuff for IT people, and especially for the developers. Some of the areas, it specializes includes - Java, .NET, Ruby, SOA, Agile and Architecture. Like many others, I am a regular user of the site, that provides me the "energy supplements" for my developer life.

Like many others, I was always interested to download the videos and slides from the InfoQ website. With some effort I could device a way to achieve that - exclusively for my private usage. I did this because, often my internet connection is slow and then watching the entire presentation/interview would eat much of my time - most of it waiting for the content to get downloaded. 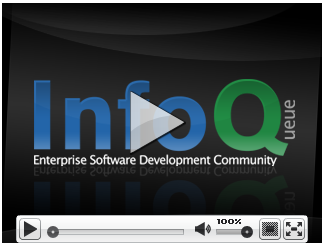 I wanted to share this technique with others on my blog. However, I was concerned on the IP rights and so checked the website for it. However I could not find one that stated a usage policy. So I decided to check the same with the website owners - c4media. I emailed them and in the reply, I was advised not to publish any details on downloading slides and videos. This was the response I got.

Thanks for taking the time to ask us about this. We’d ask that you not provide instructions on how to download or view these videos beyond the means we currently offer.

When we go out and film these interviews or presentations one of the stipulations in the agreement we sign with the conference or individual is that the video not be made available for download. By allowing or even turning a blind eye to people doing this it would not only put us in potential legal hot water but would also “blacklist” us from filming future presentations or interviews.

Due to this we can unfortunately only support people viewing the presentations or interviews in the formats we currently offer; either streaming them online or, in some cases, downloading the MP3.


It was a co-incidence to find that InfoQ was reacting publicly to seek feedback for their site, probably at the same time when I was drafting the mail. The responses will indicated that people are interested to download the videos and slides, and the InfoQ's response to these queries.

Further, I was encouraged by the InfoQ to publish their response to me, showing how transparent InfoQ was. Respecting the InfoQ's  legal terms, I have decided not to publish any technique for downloading the InfoQ videos or slides.

InfoQ may change the way it is presenting the videos and slides, to stick to its legal agreements. However, as far a technical feasibility of devising any hacks are concerned, even RSA encryption can be compromised, for that matter, given enough of time and CPU power.

I am however, happy about the fact that InfoQ is redesigning its website, closely working with the users. It may also present direct method to download interviews, which is InfoQ's "original material". I would encourage you to provide your feedback, and help yourself to make the site more useful.
The older comments are all gone! I recently migrated my blog from blogger, but the Google+ comments are too stubborn and crappy to be migrated. I am now starting all over again, and decided to instead use a new commenting system from Disqus.
blog comments powered by Disqus